When the new book by Diz was conceived it was after the discovery of many pieces of writing had been found in a box at the back of a cupboard. Writing that had been written a long time ago. Some of it was even over twenty years old! Half written projects, ideas that had been quickly noted down – but were not fully formed. None of it was a cohesive narrative. Taking the concept of William Burroughs cut ups – it was decided to take these many separate themes and ideas and create something new. Creating a character that linked the different mediums together, and with that character being a jazz musician – so the concept of composing came to mind. Like any piece of Jazz there are those moments that hook you in, and take you on a journey – and then the tune can take you off on different tangents with improvised moments before returning to its main theme. This is exactly what The Lost Notes hopes to achieve, and so far the initial feedback from those who have been fortunate to read pre release copies the concept has indeed created something that is both different and entertaining.

Gary Malby from Gama Clothing had the pleasure of reading The Lost Notes, and his reaction was everything Diz hoped. Gary is a clued up guy with a broad knowledge of music, style and culture. His site sells a range of t shirts, accessories and books to people who have interests in British subcultures, music and modernist ideals based around living a full life. He stated it is

‘Like a Blue Note Revisited album, the sights and sounds are familiar and classic, but with a brand new twist baby! A great tonic for the instant throwaway culture and a great read’

Another recipient of a pre release copy was Jason Brummell. Jason is an author in his own right, and has been called the leader in modernist fiction thanks to two seminal books and a raft of articles. His books All About My Girl and All or Nothing being cited as two of the best tales depicting the modernist experience in 60s Britain. In fact his work has spurred other people to take up the challenge of creating fiction and his encouragement of other writers is to be highly commended. His reaction to the pre release copy was also glowing.

“A highly entertaining lysergic flight of fantasy across the astral planes. An energetic rollercoaster of voodoo, jazz, Jim Morrison and the power of spirituality. As inventive and as original as a solo by the master himself, Dizzy Gillespie.”

Jason’s reaction sum up the book succinctly. For all the elements he mentions are indeed in the tale. It mixes creativity with a fantasy that evolves, and as it does it enters other realms of existence and deals with spirituality, death and magic. Its a potent mix that conjures up an original tale that is as the author hopes – refreshingly different.

Another, and the final endorsement for this forthcoming Beatnpress publication is from Detail Magazine’s Claire Mahoney. As an editor and writer herself – her reaction to the book was one that ‘Diz’ hoped would be positive and insightful. Diz needn’t have worried. She stated:

“If Jack Kerouac and Carlos Castaneda went on a road trip together, you would probably wind up with something not dissimilar to The Lost Notes. A beguiling transatlantic tale of jazz, spiritualism and Jim Morrison ” Claire Mahoney, Detail magazine

In all this experimental novella that mixes poetry, prose, screen writing, music and images together achieves what it set out to do. It is a book that is not only entertaining, but explores composition, structure and a mixed media approach to provide something that is just different enough that the experience itself is original and new. It’s a true trip with a jazz element. If it was a piece of music it could be termed Acid Jazz, but as it is a form of literature it’s a modernist beat book for the soul.

The Lost Notes by Diz will be available to pre- order from http://www.beatnpress.co.uk on the 24th of October for £10.99 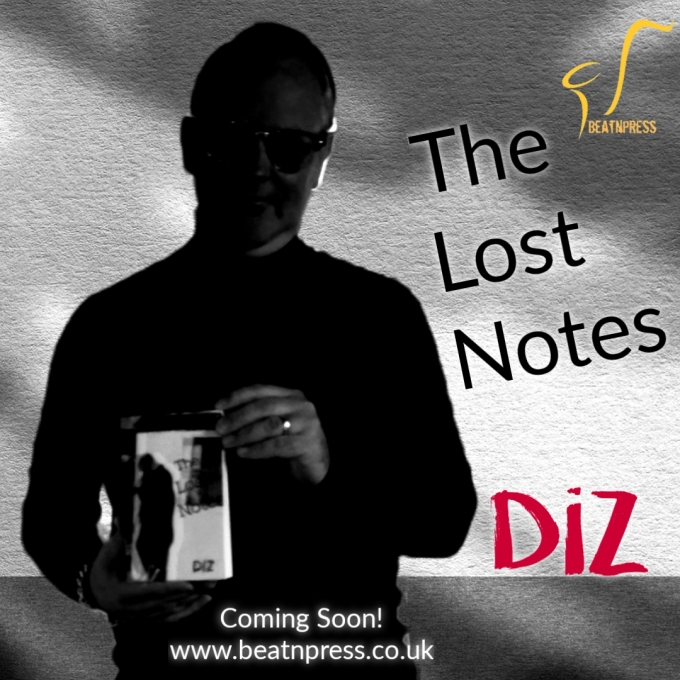 Creating something that is both original and different is no easy task these days. It can sometimes feel like everything has been done before, and to some degree that is true. The Lost Notes by Diz is a book that sees the author approach his topic in a creative form that is- well – not typical. There is an affinity for Jazz in the creation of the novel – but not in the long unpunctuated style and rhythms of the original Beat writer, Jack Kerouac. No. This book has themes running through it, ideas that are interesting tangents, and distractions, yet will return to its main theme. Much like the improvisation you would find in Jazz music. It’s novel approach creates a tale that is modern, yet has enough familiarity in it that it is still entertaining. There is in fact a point where the novel explores the ideas of clichés and whether both the book and the protagonist needs to use them. The layered approach allows the reader to enter the realms that are created. As fellow author Jason Brummell, ( All About My Girl and All Or Nothing) says – it is

“A highly entertaining lysergic flight of fantasy across the astral planes. An energetic rollercoaster of voodoo, jazz, Jim Morrison and the power of spirituality. As inventive and as original as a solo by the master himself, Dizzy Gillespie.”

Using poetry, prose, screenwriting, images and other creative elements it generates an almost fragmented trip into both reality and the fantastical that serves to echo its contents. The tale is also the result of twenty years of discarded ideas and notes that have never been published before. When the notes and discarded manuscripts were found they were edited and spliced together in yet another inspirational cut up style creating a completely new and original narrative.

As yet it is uncertain whether there will be a second tale. Diz is both a construct and a psuedonym – Should there be another though. It will certainly be another great addition to the Beatnpress library.

The Lost Notes will be available for pre orders from October 24th 2021 via http://www.beatnpress.co.uk

A new book is on its way! Published by Beatnpress, an experimental book culled from many hand written notes that consist of extracts from short stories, poems and film scripts. This non linea novella tells the tale of Diz – a young trumpet player who leaves his mundane life in Manchester, England, to spontaneously fly to New York and find himself. Roll forward 5 years. He is still in America. He is beginning to make a name for himself as a musician. Commissioned to write a Jazzy score for a movie – he takes on challenges he did not expect. Memories are evoked, and his past seems to be looming ever larger in his present day life. Vignettes crafted together build up the tale of his recent past, his mental health and the truth he is trying to escape from. Can those around him help him when it matters most?

Has continued to be a success and is so far the bestselling book at Beatnpress. It sold out of its first print run, and should sell out of its second print run soon, as half of the second print run is already accounted for – and this is before the new run has been delivered from the printers! The books should be arriving tomorrow or Thursday and will begin being shipped out to customers as soon as they arrive. So, if you want a copy go to http://www.beatnpress.co.uk today and get your order in quick.

More news and updates to come later this week.